Getting the Skeleton Files

As usual, run git pull skeleton master to get the skeleton files.

In this homework, you’ll implement a Huffman encoder and decoder, as described in lecture 38.

For example, suppose we have the file below: 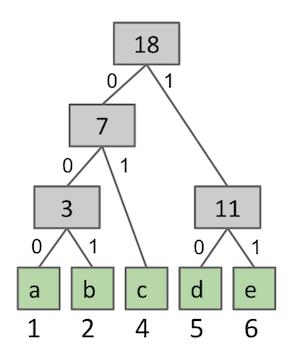 Create a class BinaryTrie that obeys the API below. The vast majority of the work for this homework is in creating this class.

Constructor. Given a frequency table which maps symbols of type V to their relative frequencies, the constructor should build a Huffman decoding trie according to the procedure discussed in class. You may find implementations of Huffman codes on the web useful for inspiration, e.g. this implementation.

The longestPrefixMatch class takes as an argument objects of type BitSequence, described in more detail below.

For example, for the example Trie given in the introduction, if we call trie.longestPrefixMatch(new BitSequence("0011010001")), then we will get back a Match object containing b as the symbol and 001 as the BitSequence. The method is called longestPrefixMatch because 001 is the longest prefix of 0011010001 that is a match inside our decoding binary trie.

buildLookupTable. The buildLookupTable method returns the inverse of the coding trie. For example, for the example Trie given in the introduction, this method should return the same map as:

Testing. We have provided a client side test called TestBinaryTrie that you should use to make sure you understand your objectives, and also to test your code.

Once you’ve written AND tested your BinaryTrie, implement the class HuffmanEncoder, with the following API:

Pseudocode for the Huffman encoding process is given below:

Some of these tasks are tricky and require knowledge of special libraries. To save time, we have provided a number of utility methods to make this process easier for you. Using these methods is optional.

See ObjectWritingAndReadingDemo.java for a demo of how to use the ObjectWriter and ObjectReader classes to write Java objects to files for later loading.

Important: Do not call writeObject once for each symbol! This will result in huge files, very slow performance, and a very complex decoder! For your sanity, use BitSequence.assemble!

Try running your file on the provided text files: watermelonsugar.txt and signalalarm.txt. You should see a modest decrease in file size for both. Your code should take no more than seconds to execute. There are no tests for HuffmanEncoder because the precise behavior is not specified.

Once you’ve written HuffmanEncoder and verified that it is able to generate files that are smaller than the ones passed in, write a class HuffmanDecoder that reverses the process, with the following API:

Pseudocode for the Huffman decoding process is given below:

As above, we have provided utility methods to make your life easier:

Your HuffmanDecoder should perfectly decode the output of your HuffmanEncoder. For example, if we run the following commands:

Then the output of the diff command should be nothing. This is because diff is a command line tool that compares two files, and prints out any differences. If the files have no differences, nothing is output.

Your HuffmanEncoder and HuffmanDecoder should work for ANY file, not just English text, and even if the input isn’t a text file at all!

Coming soon in response to questions.

You should submit the usual way, by pushing to GitHub and then submitting on Gradescope.